2.2. Preparation and maintenance of slices for electrophysiological recordings

During multiple sclerosis (MS), a close link has been demonstrated to occur between inflammation and neuro-axonal degeneration, leading to the hypothesis that immune mechanisms may promote neurodegeneration, leading to irreversible disease progression. Energy deficits and inflammation-driven mitochondrial dysfunction seem to be involved in this process. In this work we investigated, by the use of striatal electrophysiological field-potential recordings, if the inflammatory process associated with experimental autoimmune encephalomyelitis (EAE) is able to influence neuronal vulnerability to the blockade of mitochondrial complex IV, a crucial component for mitochondrial activity responsible of about 90% of total cellular oxygen consumption. We showed that during the acute relapsing phase of EAE, neuronal susceptibility to mitochondrial complex IV inhibition is markedly enhanced. This detrimental effect was counteracted by the pharmacological inhibition of microglia, of nitric oxide (NO) synthesis and its intracellular pathway (involving soluble guanylyl cyclase, sGC, and protein kinase G, PKG). The obtained results suggest that mitochondrial complex IV exerts an important role in maintaining neuronal energetic homeostasis during EAE. The pathological processes associated with experimental MS, and in particular the activation of microglia and of the NO pathway, lead to an increased neuronal vulnerability to mitochondrial complex IV inhibition, representing promising pharmacological targets.

Multiple Sclerosis (MS) is a worldwide-diffused chronic central nervous system (CNS) disorder, affecting young adults and potentially leading to progressive accumulation of neurological disability, with a relevant impact on patient's quality of life and life expectancy (Ontaneda et al., 2017). Inflammatory processes characterize MS pathogenesis since its earliest phases, both in the form of recurrent immune attacks from the periphery to the CNS through the blood-brain barrier and via the activation of direct innate immune responses within the CNS itself, e.g. microglial cells. Together with inflammatory processes, neuro-axonal degeneration can be detected in the CNS of patients affected by MS since the earliest phases of the disease (Dutta and Trapp, 2007; Trapp and Nave, 2008) and it represents one of the major causes underlying the progressive accumulation of neurological disability (Hauser and Oksenberg, 2006; Trapp and Nave, 2008). In this scenario, the identification of the pathogenic link between inflammatory and neurodegenerative processes during MS (Geurts et al., 2009) could help in the development of effective therapies against disability accumulation. During last years, several studies suggested a potential pathogenic role for mitochondrial dysfunction in mediating neuro-axonal degeneration and irreversible disease progression during the course of MS (Calabrese et al., 2015; Campbell et al., 2014; Di Filippo et al., 2010; Witte et al., 2014). Mitochondria are intracellular organelles responsible for the majority of adenosine triphosphate (ATP) cellular production, but they also play a role in calcium metabolism, reactive oxygen species (ROS) production and cellular apoptosis (Andreyev et al., 2005; Di Mauro and Schon, 2003; Taylor and Turnbull, 2005).

Inflammation and mitochondrial dysfunction seem to be intertwined in a vicious cycle, ultimately converging into a common synergistic process responsible for neuro-axonal degeneration during the course of MS. The obtained data support the evidence that microglia could play a key role, together with the activation of the NO pathway, in linking the inflammatory process associated with experimental MS to the observed neuronal susceptibility to mitochondrial dysfunction.

Inflammation-related NO synthesis and the sustained activation of its intracellular pathway, involving sGC and PKG may represent a promising pharmacological target to counteract the synergic detrimental effect of inflammation and mitochondrial dysfunction (Colombo et al., 2012, 2014) and to design effective neuro-protective strategies. 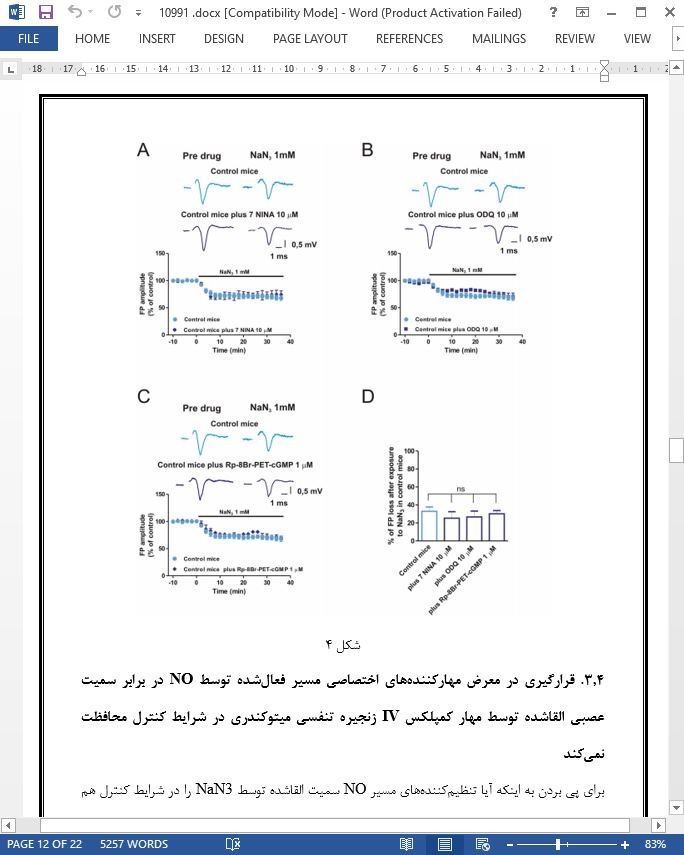 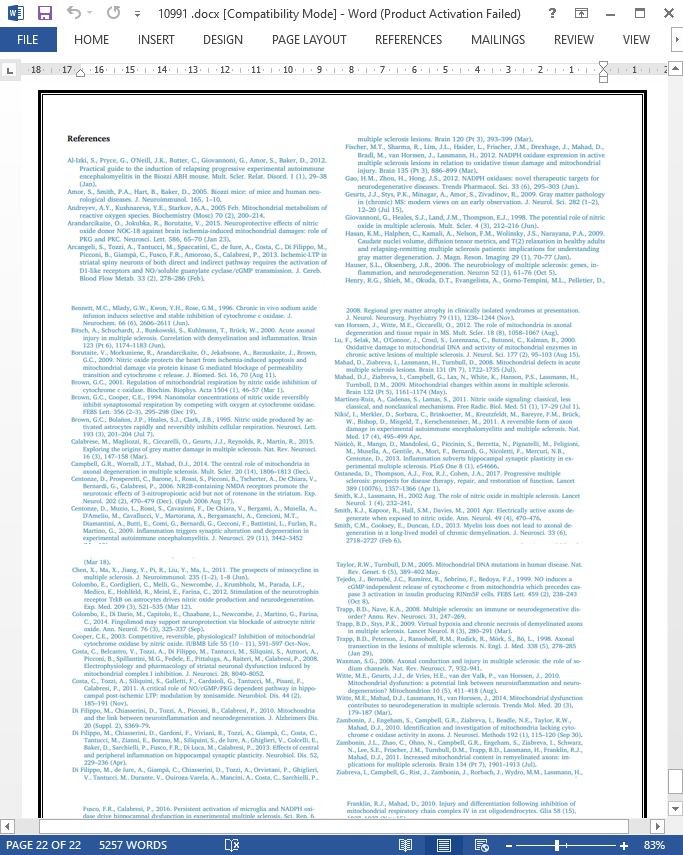