Mine tailings (MT) could represent a step forward in terms of the quality of the aggregates usually used in civil engineering applications, mostly due to its high density. The Portuguese Neves Corvo copper mine, owned by the Lundin Mining Corporation, produces approximately 3 million tonnes per year. Nevertheless, it cannot be used in its original state, due to its high levels of sulphur and other metals (As, Cr, Cu, Pb, Zn). This paper focuses on the stabilisation/solidification of high-sulphur MT, without any previous thermal treatment, using alkali-activated fly ash (FA). The variables considered were the MT/FA ratio and the activator type and concentration. A fine aggregate was then added to the pastes to assess the quality of the resulting mortar. Maximum compressive strengths of 14 MPa and 24 MPa were obtained for the pastes and mortars, respectively, after curing for 24 h at 85 °C. Thermogravimetric analysis, scanning electron microscopy, X-ray energy dispersive spectroscopy, X-ray diffraction, and infrared spectroscopy were used to characterize the reaction products, and two types of leaching tests were performed to assess the environmental performance. The results showed that the strength increase is related with the formation of a N-A-S-H gel, although sodium sulphate carbonate was also developed, suggesting that the total sodium intake could be optimized without strength loss. The solubility of the analysed metals in the paste with 78% MT and 22% FA was below the threshold for non-hazardous waste.

The framework addressing the sustainability optimisation of the mining sector is currently undergoing a very significant revolution. It is abandoning the focus on the efficiency of operations, aiming to reduce the disposed waste, and shifting to a more global paradigm, encompassing not only the mining operations but also the complete life cycle of this vital industry [1]. Wastes resulting from mining operations can result either from crushing or other, more complex processing methods. The former, normally referred to as plain “mining waste”, has been used in the construction industry (e.g., concrete, embankments) as it does not raise any special environmental concerns; the latter, usually referred to as “mine tailings” (MT), produces more worrying materials due to its high levels of different kinds of contaminants which can be washed away when in contact with water [2,3,4].

In terms of mechanical behaviour, the stabilisation of mine tailings from copper extraction using alkali-activated FA is an effective procedure which can be considered for low-strength applications (<20 MPa), like embankments or road bases. This procedure has the advantage of avoiding thermic treatment to increase the amorphisation level, while requiring only 25%–30% FA, i.e., 70%–75% of the paste will be tailings. This is significant since it represents an alternative to traditional landfilling, and it also reduces cement consumption. Considering that the above-mentioned applications require high volumes of material, this solution represents a suitable alternative to conventional binders in terms of mechanical properties, environmental friendliness, and cost-effectiveness. A UCS of 15 MPa was obtained after a curing period of 24 h at 85 °C using a 15 molal SH activator (P2C). However, the P2B paste was chosen for further analyses, since its strength/cost compromise was considered to be more effective. 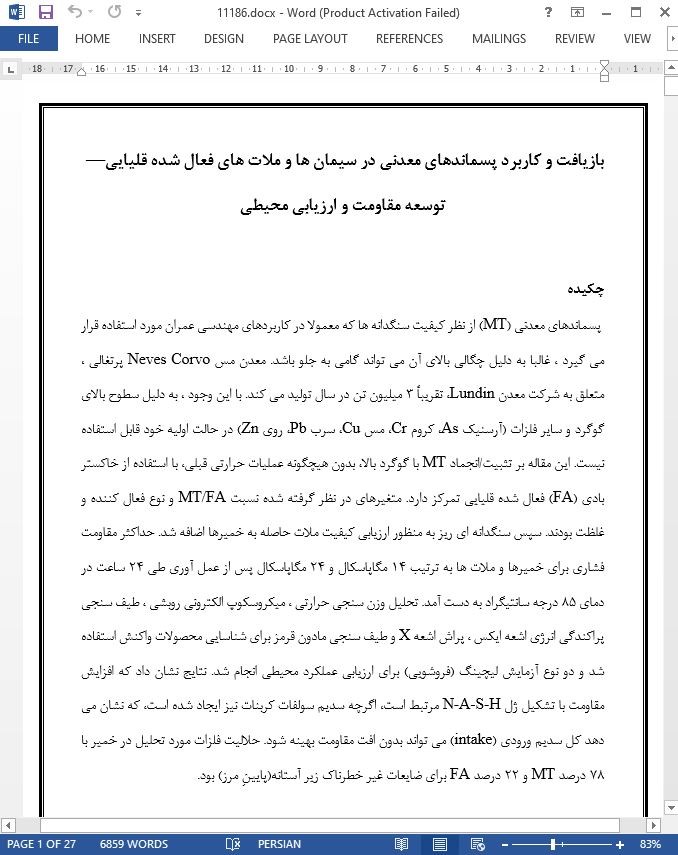 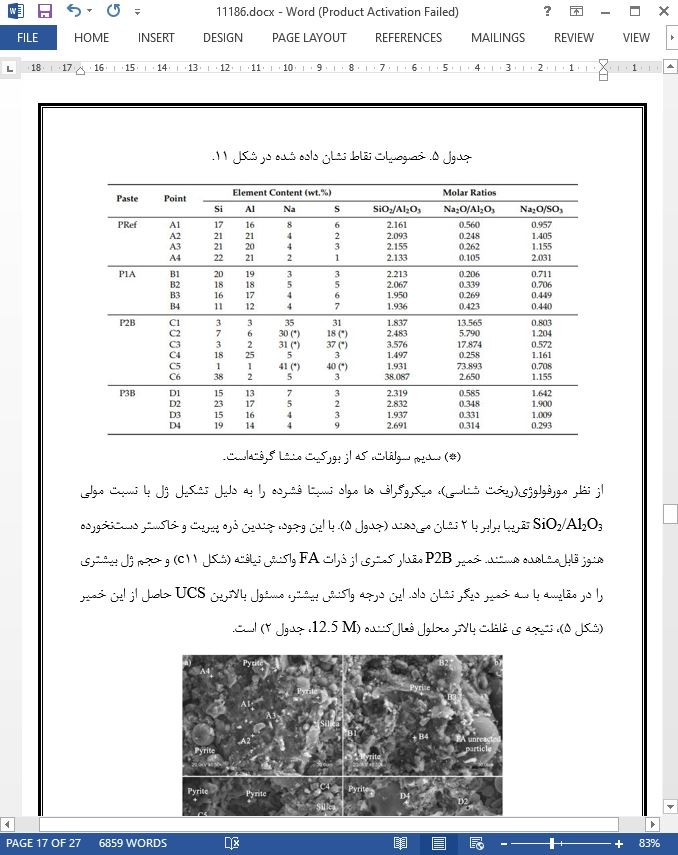