2. The French legal environment in self-dealing

3. Review of the literature and formulation of hypotheses

5.1. The determinant role of the major shareholder

5.2. The role of second-tier blockholders

This study seeks to understand the leading role played by the blockholders and their true governance mechanism, in the French context, characterised by complex ownership structures. We focus on the role that second-tier shareholders can play in the optimal governance of companies and in their capacity to solve both principal/agent and principal/principal agency conflicts. Using a sample of 2118 observations between 2000 and 2009, we find that second-tier shareholders exercise effective additional monitoring when power is contestable but increase principal/principal agency costs in the presence of a controlling owner. We also show that shareholder homogeneity reduces agency conflicts. Our results demonstrate that the level of control contestability is essential in the understanding of governance mechanisms. Such contestability is to be found simultaneously at institutional level, at the level of the balance of power between blockholders, and according to the nature of the shareholders. Thus, the usual agency theory conclusions are debateable when the legal framework offers little protection of minority shareholders, and when ownership structure is complex and heterogeneous in nature. The study of corporate governance must therefore encompass a twofold analytical perspective, namely, an institutional and a socio-organisational one. The analysis and findings could be particularly useful in assessing corporate governance in the context of several European countries with a similar self-dealing legal environment to the French one, including Italy and Greece.

The role of ownership structure in resolving agency costs arising from the separation of ownership and control withinfirms has been the focus of extensive literature for many years. Analyses initially focused on principal/agent agency conflictsbetween shareholders and managers (Jensen and Meckling, 1976). It is taken for granted that large shareholders internalisethe costs of monitoring managers’ actions due to their considerable cash flow rights (Shleifer and Vishny, 1986; La Portaet al., 1999). Ownership concentration in the hands of the main shareholder is thus expected to foster the alignment of themanagers’ interests with those of the firm (Demsetz, 1983; Shleifer and Vishny, 1986; Denis et al., 1997). Many studies alsosuggest that certain types of shareholders are more apt at taking on this monitoring role than others, but without drawingfirm conclusions as to which would take pre-eminence. The analysis framework then spread to principal/principal agencyconflicts between majority and minority shareholders due to the potential for collusion between the main shareholder and the manager (Denis and McConnell, 2003; Holderness, 2003) or the appropriation of private control benefits by the mainshareholder to the detriment of the minority shareholders (La Porta et al., 1998) and the firm’s interests.

In this paper, we study the link between a firm’s ownership structure and its performance in the French context, charac-terised by significant agency conflicts, a low level of protection for minority shareholders, and ex ante and ex post privateenforcement imposing few constraints.

Most of the empirical research on this theme focuses on the distinction between dispersed ownership and concentratedownership, leaving aside the study of the influence of blockholders other than the first, in contrast to several recent works(Laeven and Levine, 2008; Holderness, 2009) that identify greater complexity of ownership structures than this simple dichotomy. We thus sought to discover, on the one hand, the role that second-tier shareholders could play in the resolutionof agency conflicts and, on the other, whether considering the homogeneity of the shareholders can throw new light oncorporate governance effectiveness in the French context. This work therefore extends earlier studies on the links betweenownership structure, governance and performance. Our findings cover a 10-year period and over 2100 observations groupedinto three sub-samples (the presence of a majority shareholder; the absence of a majority shareholder; and no majorityshareholder but several blockholders ≥10%), enabling us to highlight the eventual counterbalancing role played by second-tier shareholders vis-à-vis the main shareholder in various ownership structures. 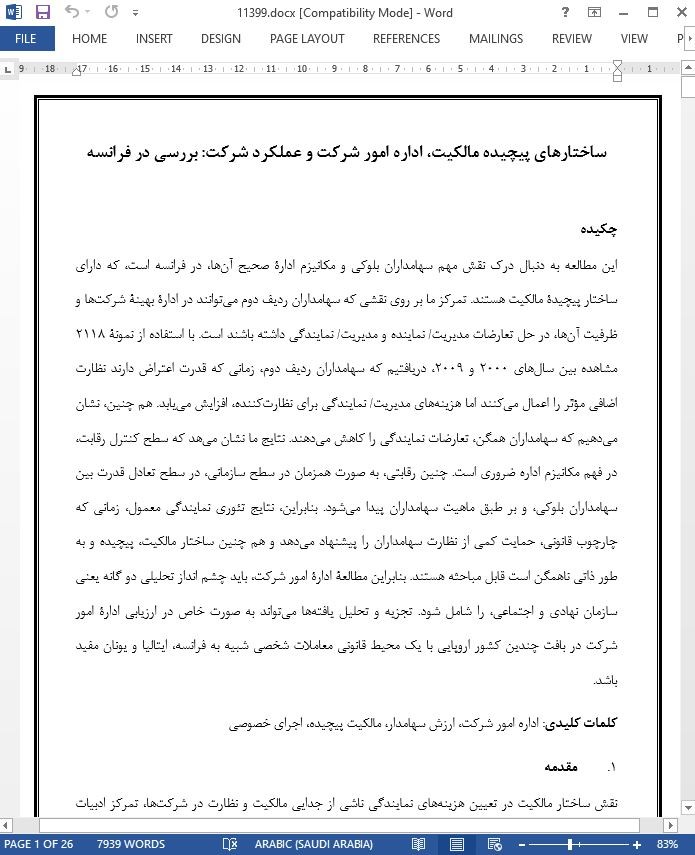 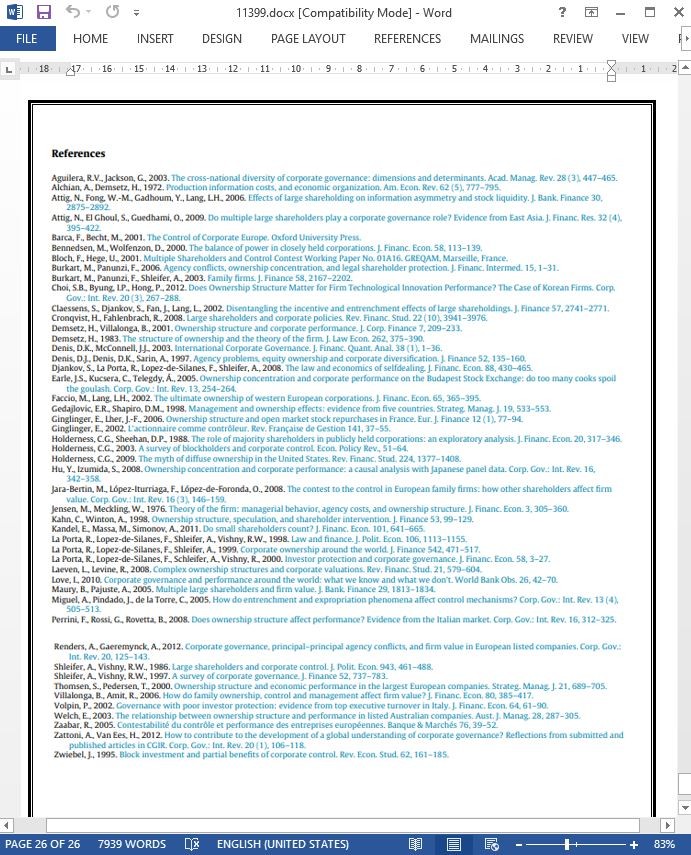