H4. ACAP mediates the relationship between EO and TIC.

Limitations and directions for future researches

Purpose – The purpose of this paper is to empirically examine the relationships between entrepreneurial orientation (EO), absorptive capacity (ACAP), and technological innovation capabilities (TIC) among industrial SMEs operating in an unstable environment. The research also aims to determine whether ACAP has a mediating role in the relation between EO and TIC.

Design/methodology/approach – A structural equation model was designed to examine the relationships. On the basis of a research framework, a self-administered questionnaire was used to gather data from SMEs owners in the Kurdistan region of Iraq. There were 432 out of 676 questionnaires returned and subsequently used for statistical analysis.

Findings – The outcomes of the present research indicate both EO and ACAP have significant effects on TIC. Furthermore, the outcomes suggest that ACAP has a mediation role in the nexus between EO and TIC and that indicates the ability of EO to strengthen TIC via ACAP.

Originality/value – The research contributes to the literature through three aspects. First, it provides some empirical evidence on the relationships between EO, ACAP and TIC of SMEs. Second, the research sheds light on the insights that firms can use externally generated knowledge as a mechanism to enhance their proactivity and willingness toward innovation. Third, for the innovation literature, it is valuable contribution to placing ACAP within the frame of EO. Thus, they can be advantageous to more development in innovation literature.

In an age of globalized markets and production, the ability to innovate is increasingly important to the success of firms (Belderbos et al., 2015; Camisón and Villar-López, 2012). In fact, the strategic status that enables a firm to embark on an entrepreneurial project is considered an essential catalyst to activating innovation capabilities (Messersmith and Wales, 2011; Pérez-Luño et al., 2011). However, in light of the resource-based view (RBV), scholars have shown that the relationship between entrepreneurial orientation (EO) and technological innovation capabilities (TIC) is not inclusive but is affected by controlled and uncontrolled factors. These include the availability of related knowledge and resources (Sciascia et al., 2014) and the nature of competition (Engelen et al., 2015; Li, 2011). Indeed, knowledge as an inherent power (Cohen and Levinthal, 1990; Javalgi et al., 2014; Liao et al., 2003) and as a potential resource to enhance other intangible resources (i.e. EO) has been researched extensively (Sciascia et al., 2014). The entrepreneurial literature have proposed that the EO is suggested to determines the extent to which firms innovate, act proactively, and tolerate risks (Lumpkin and Dess, 1996; Miller, 1983). In this sense, EO is considered as a potential factor that leverages knowledge sensing and seizing processes (Altimay and Wang, 2011; Jiang, 2005). Therefore, having a high level of EO may enhance firm’s absorptive capacity (ACAP) to absorb new required knowledge from other partners and translate it into new innovations (Flatten, Greve and Brettel, 2011; Gellynck et al., 2015; Kreiser, 2011; Wales et al., 2013). At the same time, researchers (Flatten, Greve and Brettel, 2011; Li, 2011; Liao et al., 2003) have proposed that firms with a high ability to acquire externally generated knowledge tends to outstrip firms facing scarceness in such abilities. As such, the effectiveness of ACAP as a mechanism to enhance EO, especially in the context of SMEs, remains unclear and in need of further research. 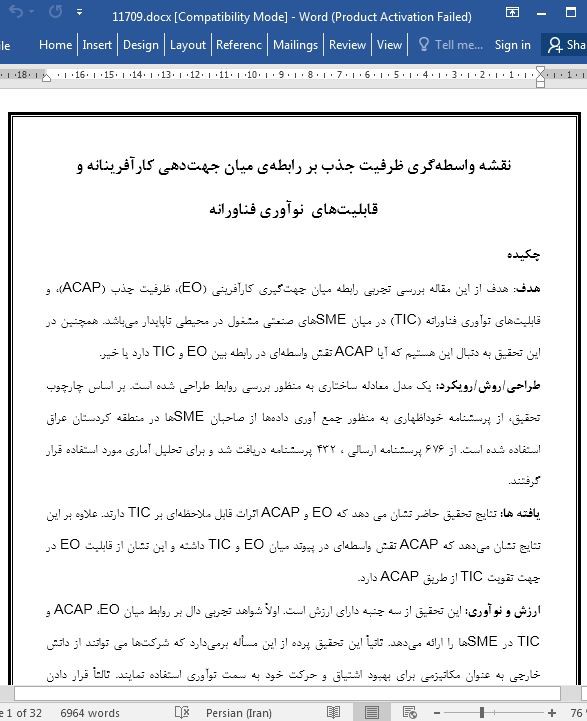 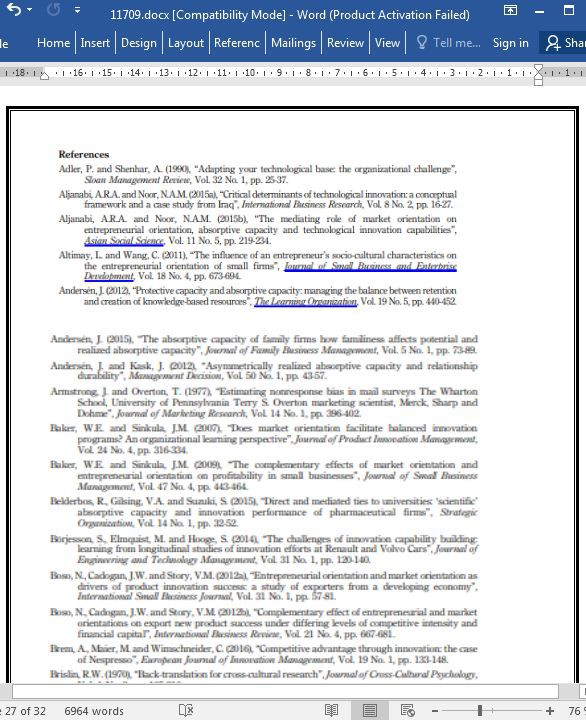